The Boundaries of Natural Science
GA 322 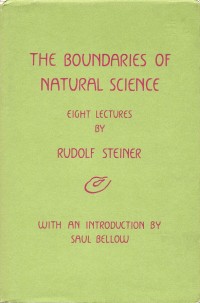 If nothing is within the reach of scientific research except what is in the sense world, the doors are closed to the worlds where the human being originates and where the creative forces of the world are found. Steiner calls on us to develop the organs of perception that go beyond these limits of cognition to where we can behold the Spirit active in the phenomena of nature.

This edition was translated by Frederick Amrine and Konrad Oberhuber from shorthand reports unrevised by the lecturer, from the 4th edition (1969) of the German text published under the title Grenzsen der Naturerkenntnis (Vol, 322 in the Bibliographic Survey). The translation was supported in part by a grant from the Austro-American Friendship Association of Boston.