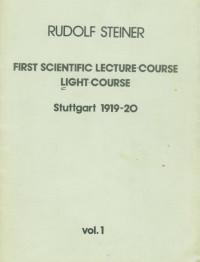 Rudolf Steiner's course on Light, which includes explorations of color, sound, mass, electricity and magnetism, presages the dawn of a new world view in the natural sciences that stands our notion of the physical world on its head.

This ‘first course’ in natural science, given to the teachers of the new Stuttgart Waldorf School as an inspiration for developing the physics curriculum, is based on Goethe's approach to the study of nature. Steiner corrects the mechanistic reductionism practised by scientific positivists, emphasizing instead the validity of human experience and pointing toward a revolution in scientific paradigms that would reclaim ground for the subject — the human being — in the study of nature.