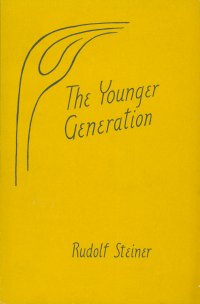 When Rudolf Steiner gave these lectures to about a hundred German youth hoping to carry the new Waldorf education into modern culture, he stressed the need for “self-education” as the preliminary to all other education. Reading what lived in the youth movement of the time, he attempted to guide his young listeners toward an understanding of themselves within the present world situation of dawning spiritual knowledge. In these lectures Steiner shows the spiritual reality behind the generation gap in which the older and younger generations speak “entirely different soul languages.” Youth longs to find spirit in nature, warm community life, and living wisdom in teachers and so must reject modern adults' dead intellectualism, impersonal social routine, and rampant egotism. While opposition may at first generate enthusiasm, only the will for creation can provide working strength in the long run. These stimulating lectures can help renew this will for creation in people of all ages.

Translated from shorthand reports unrevised by the lecturer, from the German edition published with the title, Pædagogischer Jugendkurs (Vol. 217 in the Bibliographical Survey, 1961.) The translator, R. M. Querido, has endeavored to preserve, wherever possible, the informality and directness of the spoken word which shine through the original text.