The Renewal of the Social Organism
GA 24 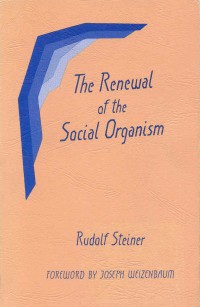 The articles presented in this volume were written during 1919 and 1920. In the Collected Edition of Rudolf Steiner's works, the volume containing the German texts is entitled, Aufsätze Über die Dreigliederung des sozialen organismus und zur Zeitlage 1915–1921 (Vol. 24 in the Bibliographic Survey, 1961.). They were translated from the German by E. Bowen-Wedgewood and Ruth Mariott; the translation was revised by Frederick Amrine. The publication of the printed volume was made possible by a grant from the Dietrich V. Asten Memorial Fund.