The Riddles of Philosophy
GA 18

The full title of this book is, The Riddles of Philosophy Presented in an Outline of Its History. It is not a “history of philosophy,” although the approach is historical. It is a review of historical and present-day world conceptions. Originally, this work appeared in two volumes in the German language. The first English edition appeared in 1973 and is bound as one volume.

Together with Truth and Science and The Philosophy of Freedom, it could be considered as one third of a philosophical trilogy. 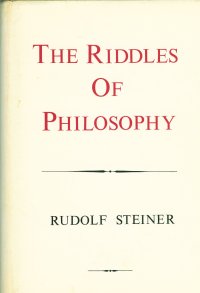 Anthroposophic Press, Spring Valley, New York, 1973, 468 pp. plus an index of names, translated from the German by Fritz C. A. Koelln.