Rudolf Steiner's book, Theosophy, An Introduction to Supersensible Knowledge of the World and the Destination of Man (published in German as, Theosophie. Einfuerung in uebersinnliche Welterkenntnis und Menschenbestimmung), is a brief but comprehensive “study of man” as well as a consideration of man's connection with worlds with which he is connected in one way or another. It includes both obvious and subtle aspects of that complicated entity known as the human being. This book first appeared in 1904 and has gone through numerous editions in the original German and in English translation. 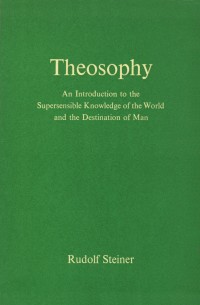 Theosophy begins by describing the threefold nature of the human being: the body, or sense-world; the soul, or inner world; and the spirit, or universal world of cosmic archetypes. A profound discussion of reincarnation and karma follows, concluding with a description of the soul's journey through regions of the supersensible world after death. The book closes with an outline of the path to higher knowledge. 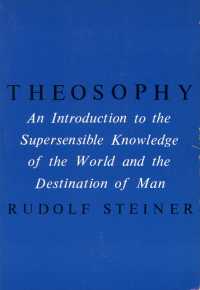 This edition is a translation of the German text (28th edition of 1961) entitled, Theosophie. Einfuerung in uebersinnliche Welterkenntnis und Menschenbestimmung in the Complete Centenary Edition of the works of Rudolf Steiner (Vol. 9 in the Bibliographical Survey, 1961), by M. Cotterell and A. P. Shepherd. It is presented here with the kind permission of the Rudolf Steiner Nachlassverwaltung, Dornach, Switzerland.