History of the Initiative 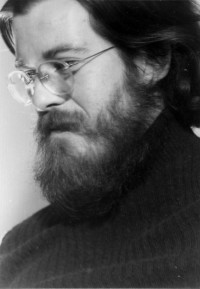 In the late 1970's and early 1980's, Werner Glas and Hans Gebert were both at the Rudolf Steiner Institute, then located in Southfield, Michigan. The e.Librarian, James D. Stewart — then affectionately known as “the bearded one,” or “that guy over there” (see photo) — was fairly new to Anthroposophy at that time, and was constantly bombarding both of the “G-men” with questions like, “Do you remember where Steiner said such-and-such?” Or, “Was it in this lectures series, or that lecture series that Steiner referred to blah-blah?”

At that time, the e.Librarian had over 15 years of experience in developing databases for computers, so it was suggested to Dr. Glas that a database be created with all of Rudolf Steiner's works in it. This database could be used as a reference tool by the Anthroposophical Community. As a side benefit, it would free up time for him as it would keep me busy and out of his hair — that elicited a smile and a pat on the shoulder.

He said this would be a very large project, considering the amount of data, and that there were no electronic copies of any of Steiner's writings at that time. But he did think it was a worthy effort, and that it should be someone like the “bearded one” to tackle it. Other folks at the Institute thought it would be a great thing to do, though very time-consuming.

At first, the writings were typed in — Jim being the worst 2-fingered typist in the world didn't help — and it was indeed a slow process. There were about 100 Steiner books in my library at that time, and it looked like an endless job! As the technology grew, and hand-held scanners became available, the books were scanned electronically and converted to text. The technology may have grown, but it was a long way from what it is today. Character recognition was primitive then, and it took hours just to get cleanly scanned pages, and more hours correcting and proof-reading each document.

Finding and buying older Steiner translations was one of the perks of this job. Haunting Mayflower Book Shop was a great pastime for Jim, and traveling around, seeking out the odd bookstore to rummage through their shelves was a real treat, too. You never know what you'll find: He went into a small bookstore in Hollywood, Florida where they only sold used paperback books, specializing in mysteries. He came out with about 30 old Steiner paperbacks from the 60's and 70's!

The Internet has been around for quite some time: the late 60's is when computer to computer communications began, and the late 70's is when a network of colleges and universities was created: the Internet. Jim's company, Creative Computer Consultants, Corp. (later, C4 Systems, Inc.), was one of the first to create software to “link” the automotive companies with their suppliers. This was not the Internet, but still computer to computer communications.

The Internet “went public” in the very late 80's and early 90's, so the Rudolf Steiner Archive became an entity on the ‘Net, offering the lectures as email attachments. Very soon after this, Jim put his servers on-line offering web, gopher, and FTP services. The Archive only had 60 lectures at that time. Everything was in a database, and all of the content was dynamically served on-the-fly. Search and display tools were developed just for this initiative, and the Archive was off and running. In 1996, Jim changed the domain name to “elib.com” and then incorporated as a 501(c)(3), not-for-profit corporation in the State of Michigan, USA!

Soon, a network of worldwide volunteers, including the e.Librarian, did the scanning, converting, and proof-reading. These texts were then converted to an Internet-friendly format and stored in the database where users from all over the world could access them and use the research tools provided.

The computers changed also: in 1982, Jim had one Radio Shack 16B Xenix computer with two, 8 inch floppy disks and an 8 Megabyte hard drive; in 1992, he had one Altos Unix server with three, 20 Megabyte disks. At one time, Jim had as many as 16 Unix servers, with over 2 Terrabytes of disk space, housed at an off-site facility, specially designed for serving information to the Internet. With this, Jim could administer the servers from anywhere in the world, and users from virtually every nation on Earth could access the information. This world-wide reach continues today!

Note: Jim retired in 2021 and the e.Lib, Inc. transferred the Rudolf Steiner Archive and its related assets to a new non-profit, the Steiner Online Library.